The Stevenson House was the childhood home of Robert Louis Stevenson (1850 – 1894), creator of Treasure Island, Kidnapped and Jekyll and Hyde, from the age of six until he finally left in 1880.

Born at Edinburgh in 1850, the son of Thomas Stevenson a noted lighthouse engineer, Robert Louis Stevenson grew up in the Stevenson House at 17 Heriot Row from the age of six. Here he was cared for through many illnesses by his mother and his beloved nurse Alison Cunningham, known as ‘Cummie’, whom he described in the Dedication of his collection of poems for children A Child’s Garden of Verses as “My second mother, my first wife”.

Prevented by ill-health from going much to ordinary schools, the Stevenson House was the centre of his world and his mind was nourished by ceaseless reading as well as the stories told by Cummie of ghosts, ghouls, Scottish history, and the Bible. He also travelled with his father around Scotland on his engineering business – once descending in a complete diving suit of brass helmet, lead boots etc. to view the underwater works for the harbour at Wick, in northern Scotland- as well as journeying with his parents to the Continent.

Intended by his father to be trained as a civil engineer, R.L.S. matriculated at the University of Edinburgh in 1867. It was soon clear, however, that the young man was unsuited for the work and he agreed with his father to study law, to give him a steady income should writing – already his chosen path – fail him.

Literature, however, had seized him. Edinburgh and the Stevenson House were still his home, and the centre of his imagination, but he began to travel more and further. London, Bournemouth, France and the Continent all drew him – for his health and sheer wanderlust. Ever and again, however, he came back to Edinburgh, that “meteorological purgatory” (Edinburgh Picturesque Notes) and this house.

On one of his voyages to France, he met his future wife, Fanny Vandergrift Osborne, and her family in an artists’ colony near Paris. Stricken by his passion for her he followed her when she returned to her home in California, and the couple were married at San Francisco in 1880. They travelled together to Europe shortly afterwards, and lived variously at London, Bournemouth, Davos and elsewhere, the locations more and more dictated by R.L.S.’s health. Poems, articles, reviews and novels were written in these years. Jekyll and Hyde, a tale of runaway science, self-experimentation and substance abuse grew from a series of vivid nightmares. Treasure Island was begun on a holiday at Braemar in Scotland at the prompting of Fanny’s young son. Kidnapped and The Master of Ballantrae followed on as his international fame as a writer grew.

After his father’s death in 1887, and because his poor health could no longer tolerate an European climate, in 1888 R.L.S. finally abandoned Britain as a home and set out on wanderings that saw him and his family eventually wash up on the shores of the Samoan islands, having covered vast areas of the Pacific in small sailing ships. Even there, with his ‘clan’ around him, his mind ranged the streets of his native city and inhabited the old house at 17 Heriot Row. He worked hard and long at his craft, that “worm that never sleeps” – conscience – driving him on to his more mature work, which as he died was left unfinished in Weir of Hermiston, which just might have been his best novel yet.

Wherever he was, R.L.S. was a son of this house, and his ghost, we think, remains.

He would certainly recognise it, as little has changed.

Under the wide and starry sky,
Dig the grave and let me lie.
Glad did I live and gladly die
And I laid me down with a will.

This be the verse you grave for me:
Here he lies where he longed to be,
Home is the sailor, home from sea,
And the hunter home from the hill. 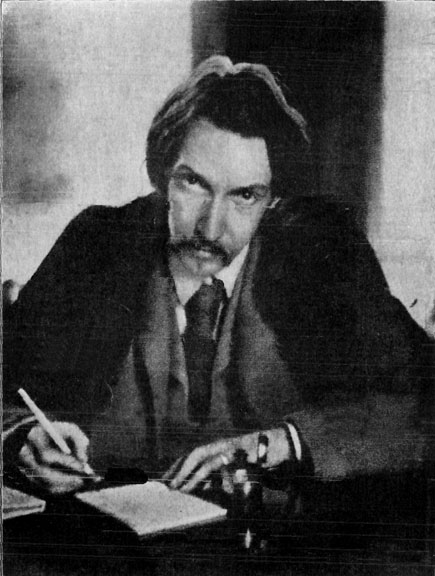 R.L.S. has a good claim to be the inventor of the Sleeping Bag, taking a large fleece-lined sack with him to sleep in on the journey through France described in his book Travels with a Donkey in the Cevennes.

Who was Long John Silver?

The one-legged pirate cook, the dark hero of R.L.S.’s most famous novel Treasure Island is said to be based on the author’s friend and collaborator William Ernest Henley, whom he met when Henley was in Edinburgh for surgery to save his one remaining leg from Tuberculosis.

Although probably afflicted throughout his life by Tuberculosis, R.L.S. actually died in 1894 at Vailima, his home on the South pacific island of Upolu, Samoa, helping his wife make mayonnaise for supper, of a cerebral haemorrhage (stroke). New Men take warning!

R.L.S. nearly died of it in San Francisco shortly before his wedding in 1880.


In his tale of Dr Jekyll & Mr Hyde, one of the first ‘psychological’ thrillers, R.L.S. portrays how two contradictory personalities – one conventional and ‘good’, the other an example of increasingly uncontrolled ‘evil’ – can coexist in one body. It is said that this was an idea modelled on the late 18th century case of Deacon Brodie, a respectable Edinburgh businessman by day who was a gambler, adulterer, armed robber and murderer by night – and nobody knew until he bungled a robbery, was eventually caught and hanged on a gallows of his own invention!

Many of R.L.S.’s works are still in print more than 100 years after his death, and the lesser known books can usually be traced in secondhand bookstores without too much trouble – and much more fun than you-know-who.com!

Read R.L.S.’s novels Treasure Island and Kidnapped, of course. Try the unfinished Weir of Hermiston too. The Strange Case of Dr Jekyll and Mr Hyde is more talked of than read, so look at it as well. Stevenson wrote interestingly about the interface between European incomers and the South Pacific, and its effect on them: read The Ebb Tide as well as The South Seas and Island Nights’ Entertainments for this.

The real gems are the letters, however: Stevenson was one of the best and most prolific letter-writers we know of and the letters are available in a number of editions.

Everyday life, drains, travel, and correspondence with about everybody who was anybody in late 19th century English language literature.